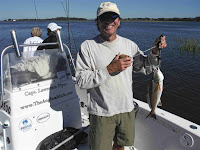 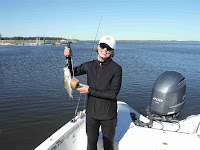 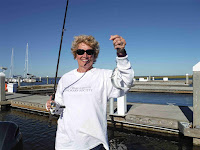 I fished yesterday afternoon as part of a "group" trip. I had Mike and Mitzi and George and Sharon on my boat, and what a fun group they were. It's a pleasure going out with folks who appreciate being out on new waters and hope that they might just catch a fish! Well, we were handicapped with a high and incoming tide and on top of that there was somewhat of a breeze, but we made the best of it and caught some fish. Our first stop was up at the outside of Tiger Island, tossing float rigs with live shrimp and mud minnows as bait. George "knocked the skunk off" when he hooked up and landed a
hungry Seatrout. The bait stealers were out in full force and all of the anglers were doing battle with them. We jumped over to Bell River and George, who had been "living right",  put another Trout in the boat. We ran around to Lanceford Creek and found a flooded grass patch with underlying oyster beds and here things picked up just a tad. Mitzi got on the board when she caught and landed and nice Trout. Then George had a strong bite and this one was pulling harder. He played the fish patiently and landed a nice feisty Redfish. Mike was getting good, long casts and it paid off as he
landed his first Trout of the day. After George and Mitzi put another Seatrout in the boat things slowed so we made one more stop over at Oyster Bay dock. In just a short while Mike and Mitzi had landed another Trout, Mitzi had a Stingray and Sharon saved her catches for last, catching the only Blue Fish of the day, but also a large Stingray. With that, we called it a day, another great one to be fishing here at Amelia Island, Florida.
Posted by Anglers Mark at 8:22 PM