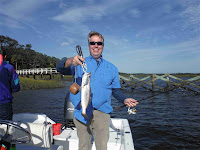 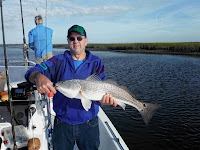 Back fishing after a good weekend of rest! I met Tom Davis and his brother in law Al down at the Sawpit Creek boat ramp this morning and we headed up the Nassau River with some clear skies but breezy conditions. Our first stop was at some exposed oyster beds on the very first of an incoming tide. The two anglers were tossing jigs and live shrimp and it only took a while before Al "knocked the skunk off" when he caught and landed a nice feisty Redfish. Then shortly after that Tom had a hookup but the fish must have came
toward the boat because we didn't think it was much of a fish until it moved on past and began to rip some drag! FISH ON! Tom had a good fish and he played it patiently as it went deep and long. He kept the pressure on and after a good battle landed an oversized 29" Redfish! We worked the bank, picked up another Red, then moved on up the way and fished a marsh run out, but with little luck. Our next stop was at some docks at Seymore's Pointe and here Al put a keeper sized Trout in the boat. We ran through the marsh and fished the other side of Jackstaff and picked up another trout, still fishing with jigs. Tom put a small but feisty Black "puppy" Drum in the boat. We moved further up a creek and broke out the float rigs. This produced another keeper sized Seatrout (all fish were released today).  Our final stop was back at Christopher Creek and although we had a few bites, we had no real takers other than a hungry Mangrove Snapper. With that, we called it a day, another great one to be fishing here at Amelia Island, Florida.
Posted by Anglers Mark at 6:40 PM