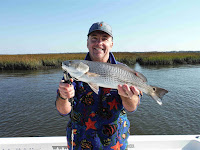 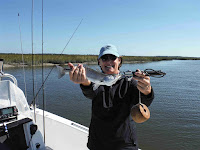 We had another beautiful morning today when I met Wayne and Julie Iurillo down at the Sawpit Creek boat ramp. It was a tad bit cool - light jacket weather - which made for a great day of fishing here in north Florida. We ran up the intercoastal and dipped into Jackstaff and then further up a side creek to set up outside a marsh run out with plans to toss float rigs and live shrimp. Both anglers jumped right in and were making excellent casts and getting great drifts, but we had no real bites. We bounced across the creek and switched to jigs and here Wayne "knocked the skunk off" when he
boated a hungry Seatrout. And shortly after that he had a stronger hookup and when the drag ripped we knew this was a bigger fish. Wayne played the fish expertly and after a good battle, landed a nice Slot sized 20" Redfish. We continued to work the bank then ran around to fish the Nassau River, hitting outcrops of oysters and marsh grass. Each stop we'd pick up a Trout or two and at the last one we hooked up with a nice feisty Redfish, which Julie worked to the boat. Our next stop was down at Broward Island and again, a Trout or two and a bunch of nibbles. We hit some docks on the way back to the boat ramp and hadn't had a bite until Julie said she had a fish. It wasn't really pulling - I even guessed a Flounder - but as she reeled it up it got heavier and heavier then when it came to the surface we saw that it was a huge Seatrout! And when it realized it was hooked it made a huge commotion and BOOM! It was off!  I made a dash at it with the net but missed and all we could do was guess on how big it actually was. Massive was my guess. We hit a couple of more oyster beds on the way back where Wayne landed a Trout or two, and Julie put a Redfish, Trout and Flounder in the boat, to round out her Amelia Island Back Country Slam. With that, we called it a day, another great one to be fishing here at Amelia Island, Florida.
Posted by Anglers Mark at 6:56 PM