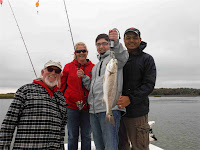 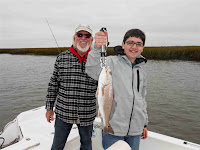 Although it was a raw looking morning today, my guests were game to get out on the water and get some fishing in. I met Anthony and Cindy Alejondro, her dad Ron and their son Amadeus down at the City marina and we ran up Lanceford Creek to fish some flooded marsh grass on the first of an outgoing tide, tossing live shrimp under float rigs. Although the bite started slow, things picked up when the anglers began to get their rigs out beyond the grass. Grandpa Ron "knocked the skunk off" when he landed a
hungry Seatrout, then Cindy followed that up with a keeper sized one. Anthony had one almost to the boat, but it shook the hook. Ron and Cindy had the father-daughter duo going when they put a couple of more trout in the boat, each. The bite shut off like someone flipping a switch so we eased back, fished some docks with jigs, tangled with bait stealers, then ran around to fish the outside of Tiger Island.  Young Amadeus had made an excellent cast up to a shallow area but it appeared he was hung  up in the oysters. He pulled it off and BOOM! FISH ON! We could tell this was a bigger fish because his drag was ripping. Amadeus kept the pressure on and worked the fish into the boat, a nice 20" Slot Redfish! We fished the area for a while, picking up a couple of Trout, then ran on up to the Jolley River. Amadeus found his second Slot Redfish and his Grandpa Ron landed a Red, too. They added a keeper sized Seatrout along the way. We finished the trip fishing a couple of more spots up in Jolley. The sun came out and warmed things up as we headed in, counting it as another great day to be fishing here at Amelia Island, Florida.
Posted by Anglers Mark at 6:39 PM