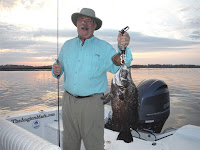 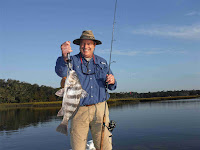 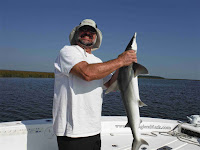 I wrapped up my week today fishing with Jack Dickens and his buddies Wally and James, meeting them down at the Eagans Creek boat ramp next to Leaders and Sinkers. While we were there, we found a likely dock to fish as the tide began to come in. Whoever said that catching a fish on the first cast was wrong because after our first cast produced a keeper sized Seatrout, we caught fish for a good while after that. All three anglers got in on the action, catching Trout, a small Redfish then Jack had a strong hookup and, FISH ON! This was a big fish - it was ripping the drag on Jack's
reel - and I was guessing BIG Redfish. It even boiled the surface a couple of times, then ran deep and strong. But Jack kept the pressure on and when he got it to the surface we saw that it was a huge Tripletail! Then it ran deep again! After a long and patient battle, Jack landed the beast which we measured at 22"+ and the Boga Grip scale showed right at 9lbs. Boy what a fish! After that, both Wally and James put some keeper sized Black Drum in the boat. When the bite slowed we ran around to fish the outside of Tiger Island but had no bites. We fished Jolley Bank, but had no
bites. After running further up into Jolley we found some more Trout, putting a couple more keeper sized ones in the boat. Both Wally and James did battle with some 4' Bonnethead Sharks then we dropped back to the mouth of Tiger Basin and wrapped things up with a few more Trout catches and then we headed in, counting it as another great day to be fishing here at Amelia Island, Florida.
Posted by Anglers Mark at 6:11 PM