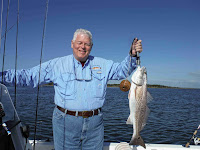 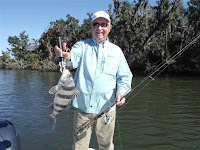 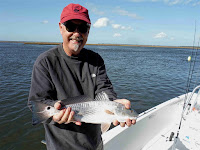 Back to fishing after a long Thanksgiving weekend! Doug Mackle had set up a trip to fish with his friends Bruce and Paul and we met up at the Dee Dee Bartels boat ramp. The morning started out with just a slight breeze and clear skies as we ran up to the Jolley River with plans to fish a large outflow with float rigs and live shrimp. We had timed the trip to begin a tad bit later and catch the outgoing tide, but my timing was off - it was still coming in...and we had just a bite or two at that first stop. We dropped back and fished Jolly
Bank and again, just a nibble here and there. We came further back and fished the outside of Tiger, had a some better bites and finally, a fish! Paul had something big roll at his bait and take it and as he was re-baiting, Doug went in and BOOM! FISH ON! We could tell by the way the fish kept rolling up that it was big. The drag was ripping and the fish was holding its ground. But Doug kept the pressure on and worked it slowly to the boat and after a good battle, landed a nice oversized 27.5" Redfish. Boy what a way to knock the skunk off! After that we picked up a couple of Seatrout then we
moved on around to behind Tiger and here things really heated up. The trio of anglers began to pick up some Black "puppy" Drum, with a few keeper sized, they landed a handful of Redfish, many right at 17 3/4", but a couple in the Slot, then Bruce started finding keeper sized Trout out deep, slowly bouncing a jig down deep on the bottom. What started as a very slow day turned out to be a good day of fishing when the water got lower on the outgoing tide.
We counted it as another great day to be fishing here at Amelia Island, Florida.
Posted by Anglers Mark at 9:58 PM