In Search of Redfish on a Fly 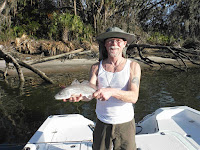 I met Keith yesterday at noon up at the Dee Dee Bartels boat ramp with plans to target Redfish with a fly rod. We didn't have a "flood" tide so I knew it would be blind casting spots that we typically catch fish with bait and spin gear. I think everybody and their brother is off this week because the parking lot was packed with trucks and boat trailers. We decided to make a long run away from the area and up the Bell River to fish some dock pilings with a weighted "Live Shrimp Fly". It wasn't long before Keith was making excellent casts to the pilings and we worked them pretty good, but had no takers. We  moved around and into the Jolley River, stopped at the MOA, fished it thoroughly, then continued on around to Snook Creek. Boy was it a pretty day! There was only a slight breeze, the tide was down to the bottom, and it was easy casting...but again no takers!  We made our final stop around at Tiger Island as the tide started back in and this did
the trick. Keith was putting the fly up on the bank and between the stumps with an intermediate sinking line and he had his first hookup, a hungry Seatrout. We bounced up and down the island and after Keith had made a spot on cast, a nice fish chased his fly down and, FISH ON! He played the fish perfectly and soon landed a feisty Redfish.  After moving one more time (and spotting a Salt Marsh Mink) Keith picked up another Trout on the fly, then we headed in, counting it as another great day to be fishing here at Amelia Island, Florida.
Posted by Anglers Mark at 6:00 PM