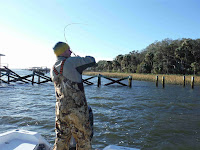 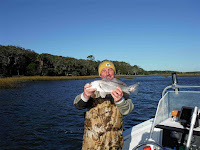 It was a beautiful morning today, albeit somewhat "breezy", as the weatherfolks like to call it. I had the pleasure of fishing with Mark Thibodeau again, a fly fisher. This time we met down at the Big Talbot Island Park boat ramp and headed up the Nassau River to fish an outgoing tide with an intermediate 8w sinking line and a new "live shrimp" fly that I had tide this past week. As usual, Mark was making excellent casts, and into a 9mph wind, at that. We worked along one shell bank, then an outflow, then another, but had
no real bites. Our next stop was over at some docks at Seymore's Pointe. Mark was putting his fly right up next to some pilings and in between, and this did the trick. He had a good "thump", set the hook, and patiently worked in a nice keeper sized Flounder (all fish were released today). And just a few minutes after that, he had an even stronger bite and a hookup. This fish had more "shoulders" and made a run across a shallow mud and oyster flat but Mark kept the pressure on and soon landed a nice feisty Redfish. The wind was picking up so we ran down the Nassau River and past the Oyster Factory and found a haven on the lee side of the land mass where we worked some more docks. We had no bites so we continued on down to Broward Island - my "go to spot" for the day. Unfortunately the tide was still ripping out and meeting the wind head on and this made for some difficult fishing and boat handling. We gave it our best but even though the tide was getting down to where it needed to be, it was just not meant to be. We ran back and through Jackstaff, fished the far bank, then headed in, counting it as another great day to be out on the water here at Amelia Island, Florida.
Posted by Anglers Mark at 10:20 PM