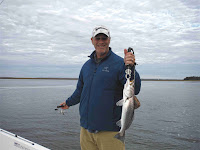 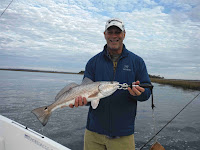 We had a cool morning today, with just a slight wind that was supposed to pick up as the day went on. Greg Bancroft and I launched up at the Dee Dee Bartels boat ramp and ran around to the Jolley River to fish some structure as the tide continued to come in. Greg was making excellent casts with an 8w fly rod and shrimp pattern, but had no takers. The minute we switched to live shrimp and  a jig, BOOM! Fish On!  Crazy. But that's what they wanted and Greg caught fish after fish: feisty Redfish that just missed the
Slot, then he put a nice 19" Slot Red in the boat. He picked up a Trout now and then, and finally got a keeper sized 18" one. We worked the bank thoroughly with Greg catching a feisty Black "puppy" Drum to make it a Slam, then he added a keeper sized Flounder to make it a Grande Slam, then he added a Sheepshead to make it a "Super Grande Slam"!  And to top it off, he had a strong hookup and a Big Fish On! Greg played it patiently and worked it slowly to the boat. The fish rolled up and we saw it was a really nice Slot Redfish. It was no match for Greg and he landed the 24" Slot Red -biggest fish of the day. We fished the area a tad bit more then ran around to the Bell River, found a Trout and a Blue, then continued over to Lanceford Creek where we wrapped the day up catching one hungry Trout after another - another great day fishing here at Amelia Island, Florida.
Posted by Anglers Mark at 6:13 PM