Back at The Fly 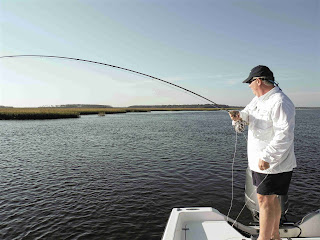 Peter Brookes and I did a second day of fly fishing today, but this time we met down at the Big Talbot Island park boat ramp at sunrise and made the short run up the Nassau River to set up at Twin Creeks on an incoming tide. The shell banks were still showing when Peter started out with a top water Gurgler to see if a Trout would hit, which they did not. He switched to a root beer colored Troy James Fly and worked it deep on an intermediate line and had no success with that either.

We moved back east, down the Nassau and fished a long stretch of shell bed that tapered off 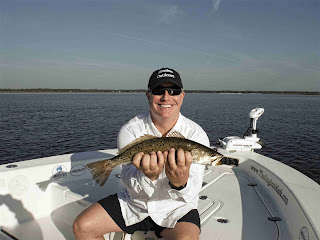 into 13' of water. Pete stayed with the sinking line and figured out that he could make his cast  up current (the same as when we fish live shrimp on  a jig) and let the current take his fly down along the bottom and when he felt a thump, set the hook!  Sometimes it was just the bottom but a couple of times, BOOM! Seatrout on! It turned out to be the method to catch fish.

We ran down to Pumpkin Hill and fished some more shell beds, now flooded, and used the same technique. This time when Pete hooked up we knew it was a bigger fish by the way it caused such a commotion! He worked the fish in with 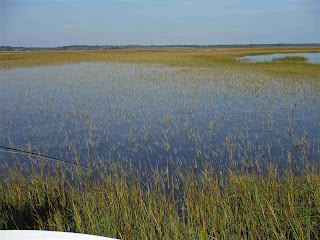 his line hand, keeper pressure at all times on the fish, and soon landed a fat 19.5" Seatrout. Now that's a nice fly caught fish!

The tide was up so we went back to floating lines and ran over to Horsehead to check out some flooding grass flats. It took a couple but as I eased up to a nice looking flat Pete saw it first - a tailing Red! We were debating on getting out and wading to it then we noticed that it was coming our way!  It fed nose down into range and Pete made his cast and put the fly perfectly out in front. The fish did see the fly and kept moving and again, Pete picked up and laid it down. The fish turned to the fly, seemed to take it and Pete set the hook....BOOM! The Slot Red boiled out of there. It appeared Pete had him on for a split second but the hook just didn't take. But it was a cool experience. We moved on, checking out a handful of grass flats but saw  no more fish.  The sun was up, Pete had a plane to catch, so we called it a day, another great one to be fishing here at Amelia Island, Florida.
Posted by Anglers Mark at 4:35 PM