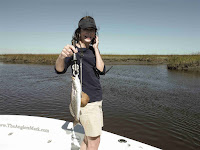 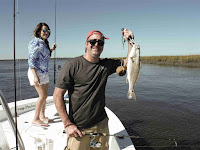 We tried an afternoon trip today, with plans to fish at 1pm on a falling tide. I met Pat and Caress Garten, their son Matt and his wife Paloma down at the Sawpit Creek boat ramp and we made a short run up the Nassau River, stopping at a couple of marsh run outs.  Caress, Paloma and Matt were tossing live shrimp on jigs to the exposed oysters while Pat slung a fly at the stern.  It didn't take long at all - Boom! Caress put a keeper sized Seatrout in the boat (all fish were released today).

We worked the bank thoroughly, and Matt got hot, picking up a
handful of Trout and a couple of Redfish, one being of Slot size. After he put a beautiful (and aggressive) Blue Crab in the boat, Paloma hooked up and had a nice Whiting to the boat. But my net had broken on Matt's Slot Red so as Paloma got her fish close to the boat I could only watch as it flipped off and secured its freedom.

We hit a couple of the marsh run outs, caught a fish or two or three, then ran down to Broward Island to fish the last of an outgoing tide. 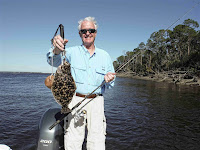 It was kinda slow until Pat put a jig and shrimp up to a protected pocket, had a strange bite, and a hookup. He worked it patiently to the boat and landed a keeper sized Flounder.

We fished some oysters in Pumpkin Hill, had no real bites, then ran back and fished some docks at Seymore's Pointe, and again, no real bites. Our last stop was over at the mouth of Jackstaff and with evening approaching, the fishing and catching got real nice. Pat landed a couple of Seatrout to round out his personal Amelia Island Backcountry Slam and Matt put a few more fish in the boat, too. With that, we called it a day, another great one to be fishing here at Amelia Island, Florida.
Posted by Anglers Mark at 9:03 PM