Cold and Dreary Makes for a Good Day 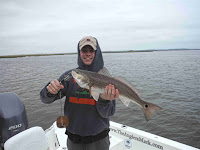 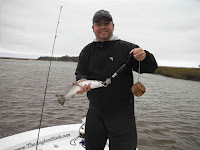 After a rainy and windy Thanksgiving day, today was somewhat bleak when we launched early this morning. Rain was on my windshield as I headed for the boat and luckily that quit, but the skies remained overcast for much of the trip, and the wind stayed steady at around 11mph - not the perfect day you'd think for fishing! 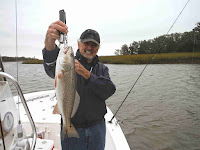 But my anglers were ready to go  - Tripp Brown, his dad Eddie Brown and  his nephew, Bennett. We met up at the Dee Dee Bartels Park and ran around to fish the back side of Tiger with a tide that had been coming for a couple of hours. Wouldn't you know it, first cast of the day with a jig and shrimp, BOOM! Big fish on! Bennett was on the rod and he played it patiently - this was a big fish. He worked it slowly to the boat and soon landed a nice 25.5" Slot Redfish. Now that's the way to start the day. Coincidently, it was in the exact same spot as the first fish caught on Wednesday,  another big Redfish.  From then on, the anglers were catching fish. Tripp put a handful of feisty Reds in the boat, and another handful of Seatrout, a couple which were keeper size. Eddie added some Trout and Reds then Bennett landed a keeper sized Black "puppy" Drum and more Trout and another Slot sized, six spot Redfish.


When things slowed we made a quick run over to Bell River and found some more Trout, this time drifting float rigs and live shrimp along a marsh line. When Bennett hooked up with a drag-ripping fish I thought for sure, at first, that he surely had a huge Seatrout. But after expertly working it to the boat, we saw that it was a large Black Drum, boy what a  fighter!

We moved on, making a run up Lanceford Creek and hit a small grassy island. It took a while but we found some fish, and caught Seatrout after Seatrout, with a few of them being keeper size. Bennett added a small Sheepshead which gave him an Amelia Island Backcountry Grande Slam of Redfish, Seatrout, Black Drum and Sheepshead. He also had a Whiting!

Our last stop was at the mouth of Eagans Creek in attempt to get out of the wind an get some last minutes of fishing in. Again, we found Trout and landed few. And with that, we called it a day, another great one to be fishing here at Amelia Island, Florida
Posted by Anglers Mark at 7:07 PM