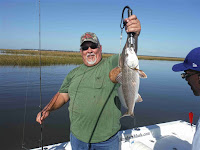 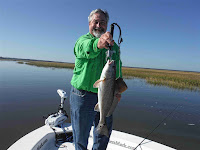 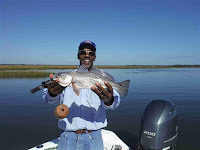 About four months ago four friends who played football together in high school made a plan to get together for a day of back water fishing here at Amelia Island. My buddies Tony French, Daniel Rhodes and Raymond Keen met me at the Dee Dee Bartels Park this morning. Although we have been keeping up with each other on Facebook over the years, I haven't seen Tony since a reunion a couple of years ago, I haven't seen Daniel in years and years, and Raymond and I just cross paths in Fernandina once in a while.
Luckily schedules lined up and the plan came together, and the fish cooperated!

We made a short run over to the outside of Tiger Island and set up with float rigs and live shrimp, tossing them to the flooded marsh grass on the last of an incoming tide.  It only took a few minutes before we began to get fish. Tony seemed to get the hang of it early and put a couple of nice Trout in the boat. Daniel followed suite
and began to get hookups. Then Raymond joined in. Many of the Trout were undersized, but it was nice to see many that went 15-18" and keeper size.

When the bite slowed we crossed the creek and fished another line of marsh grass and caught a few more Seatrout. We then ran up to the Jolley River, fished  the "bank", but only had a Gar fish for action.  After running further up the Jolley and now that the tide
had started out, things began to get right. Daniel had put his cast right up into the edge of the grass and in a short second, BOOM! Fish on!  He played it perfectly and soon landed a nice Slot Redfish. 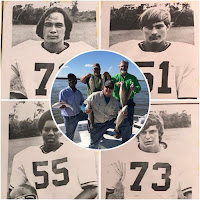 We eased along the grass and found a small marsh runout and then things got crazy. All three anglers, if they managed to get their cast up near the grass, were almost guaranteed a fish. A couple of times we had a "double" hookup. Raymond put a couple of Slot fish in the boat, Tony put a couple of Slot fish in the boat, and Daniel did the same. We began to "cull" Redfish. The highlite was when Daniel hooked up and while he was talking his fish in, Tony hooked up and it was a big fish. The drag was ripping, Tony was playing the fish, Daniel was playing his fish, and Raymond hooked up! We got a Triple! We caught fish until we ran out of bait and called it a day, another great one to be fishing here at Amelia Island, Florida.
Posted by Anglers Mark at 7:21 PM