Fishing In A Fog 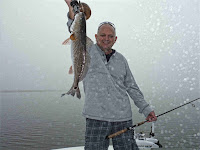 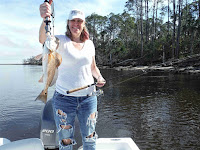 Boy was it foggy this morning! I had met Tanya McDermott and her friend Donald down at the Sawpit Creek boat ramp and visibility wasn't but about 50 yards so we inched our way out of Sawpit and up the intercoastal to make our first stop along a bank in Jackstaff. I had both anglers tossing float rigs with live shrimp in hopes that maybe we'd find a Redfish along the bank but we only had one nibble.

We ran through Horsehead and around to Seymore's Pointe and set up stream from some dock pilings and Donald "knocked the skunk" off when he landed a hungry Seatrout then a fat Redfish. We dropped back and fished another dock and here Tanya had the hot hand, landing a couple of nice Trout.

Our next stop was down at Pumpkin Hill and here we again worked some oysters beds where the mud flats were draining but to no avail. Our final stop was down at Broward Island, fishing the logs, and as the fog lifted, both anglers found fish. They landed  a good  handful of Seatrout and handful of feisty Redfish. Although we started out in a god, we had good action later and it turned out to be a great day to be out on the water here at Amelia Island, Florida.
Posted by Anglers Mark at 9:19 PM