He Had The Touch 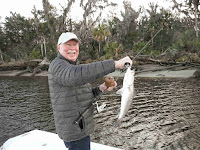 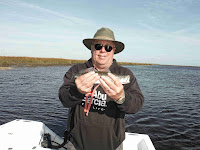 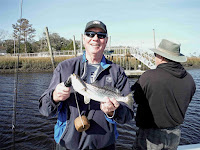 Finally, back at it today!  I fished this morning with Frank Boehm and his buddies Jack and Darrel Severson, meeting them first thing up at the Dee Dee Bartels Park and heading north and west to give the Tiger Islands a shot at the very bottom of a low tide. We worked the pockets with live shrimp and "Ozzie Jigs" tossed to the bank and fished slowly back. It didn't take long before Darrel had a hookup and BOOM! First fish in the boat, a nice keeper sized Seatrout. I thought, "here we go!". But it was slow going after that, even after
the tide turned and started back in - we had some bites but no takers.

We made the run around to Lanceford Creek and fished Oyster Bay dock  on that incoming tide. The guys were making excellent casts but again, no takers. After briefly fishing some oyster beds we found some docks with deeper water and this did the trick.

We found that we could toss the jig up near the dock, let it go to the
bottom then bounce slowly down the river bottom and after soft "bump", set the hook and , fish on! Jack seemed to have perfected the hang of it as he was "on fire". But both Darrel and Frank caught fish too. Darrel hooked up with a feisty Redfish and then Jack put a 10" Black "puppy" Drum in the boat.

Most of the Trout were in the 14" range but we did have a couple that were of keeper size. Although it was a tad bit windy we were able to find some areas to fish that had land mass blocking the breeze and it turned out to be another great day to be fishing here at Amelia Island, Florida
Posted by Anglers Mark at 11:29 AM