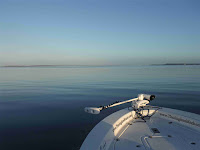 Wow what a pretty morning we had today! Zach Peyton and I launched up at the Dee Dee Bartels Park boat ramp early this morning and the water was like glass. We left the dock and skimmed across the river to make Tiger Island our first stop. The tide had just started in so we began tossing jigs and live shrimp to the pockets and it didn't take long before we were hooking up. Zach quickly knocked the skunk off with a nice feisty Redfish catch then we were both landing fish. We had a few that "pulled the hook" and I kinda wonder if those weren't Sheepshead. A couple of them were 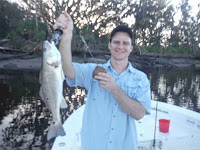 big enogh to force their way away from the boat and into the downed limbs.

But we had enough action to make up for it and after a good handful of the smaller Reds, Zach landed a nice keeper sized Slot fish. We worked the bank thoroughly, landed a small Black "puppy" Drum, then headed back to Eagans Creek to fish some dock pilings. It was somewhat strange - we had no bites (other than baitstealers) but when we moved to the other side of the dock we began to pick up fish.  Again, a very good flurry of Redfish catches, and one or two that broke off on the pilings, then we landed a nice keeper sized Black Drum.

When that bite slowed we made the run up Bell River, fished some more docks, then made one last stop in the Jolley to fish some float rigs along a  now flooded oyster bank. Zack picked up another Redfish and I landed a small Seatrout. And with that, we called it a day, another great one to be fishing here at Amelia Island, Florida
Posted by Anglers Mark at 5:57 PM