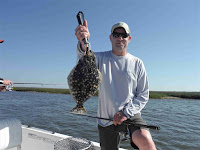 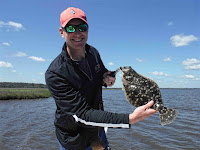 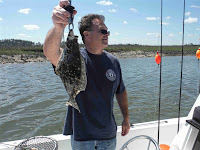 I met Kevin Pride and his fishing buddies Mike and Ryan down at the Sawpit Creek boat ramp this morning, and boy was it a pretty morning! We ran up the intercoastal and dipped into Jackstaff with plans to fish a large outflow with float rigs and live shrimp. Although we had a nibble or two, we had not takers, so we crossed over and fished a flooded oyster bank with jigs and the shrimp, but again, no luck.

After running thru Horsehead we stopped at some docks at Semore's Pointe, fished 'em thoroughly, then continued on down the Nassau, heading east, to some more oyster banks. Ryan finally kicked things off when he landed a nice keeper sized Flounder, then he picked up a keeper sized Seatrout. Kevin joined in and picked up a couple of nice Trout.

We made the run down to Broward and although the water was
muddied up from the west wind, Kevin did hookup and land another fat keeper sized Flounder. We worked the bank for a good 45 minutes, then headed back to the ramp. But we decided to fish the now exposed oysters along the bank south of the boat ramp and first cast, BOOM! Mike hooked up and landed our third keeper Flounder. Then we had a an explosion of fish catching - Ladyfish! - the first we've caught this year - and they were fairly large, in the 2 lb range, caught on jigs, deep. It was a great way to wrap up a beautiful day of fishing here at Amelia Island, Florida.
Posted by Anglers Mark at 6:39 PM