Young Eagles Checking Us Out 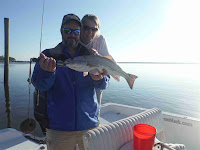 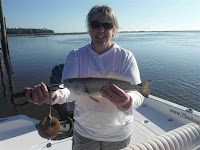 I had the pleasure of fishing again with Russ and Adrienne Futrell today, meeting them up at the Dee Dee Bartels Park boat ramp early on a clear and sunny day. After some bad weather days it was good to get back on the water!  We made our first run around to Eagans Creek and fished some marsh grass with float rigs and live shrimp but we didn't get a bite.

Our next stop was at some dock pilings and after a few casts Russ had a hard bite and a good fish on. He applied some pressure and
got the fish out from the pilings then worked him in patiently, to land a nice 22" Slot Redfish. Skunk off the boat!  The couple added a few more fish, with Adrienne putting a hungry Seatrout in the boat, Russ added a feisty Red, then Adrienne did the same. The fish catching wasn't "on fire" but we did get some good catches before we left.

We made the long run to Bell River and fished a few more docks with not much luck.  We then continued on around to the Jolley 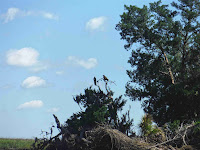 River where Adrienne caught a small Flounder-which gave her an Amelia Island Back Country Slam.  Our final stop was at Tiger Island and here Russ added a nice keeper sized Flounder and the duo picked up another couple of feisty Reds. We were under the watchful eye of a couple of young Bald Eagles. It was a beautiful morning, we had a few fish in the box, so we counted it as another great day to be fishing here at Amelia Island, Florida
Posted by Anglers Mark at 8:55 PM