The Fog Lifted And The Fish Began To Bite 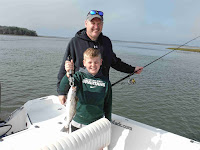 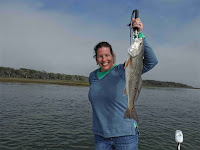 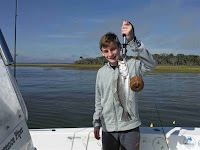 We had to creep away from the boat ramp this morning after I met Tenniel Zielaskowski, Bill and the young anglers Jasek and Alex up at the Dee Dee Bartels boat ramp. The tide was low but had been coming in for a couple of hours so we ran around to Tiger to take advantage of that incoming tide. I think Jasek had a hookup on his first cast, a nice Seatrout, that he expertly reeled in. Then Bill was quickly on the board with a keeper sized Trout. Then.....not much of anything! We worked the bank up and down, had some nibbles here and there, but no takers, so we made a move.

After coming out and around up towards Jolly we found a marsh rounout and fished it with jigs and minnows, then went on around into Jolly and switched to float rigs and minnows (no shrimp today). It was perfect conditions with the water flooding the oysters, but we had no takers other than a brief hookup by Jacek with a Gar fish.  The fog was still thick and we had to slowly find our way back to the outside of Tiger.

We stuck with the float rigs and had made a dozen casts or so and
just as it seemed the fog was going to lift the anglers began to get bites.  There were a couple of Trout then Tenniel's float disappeared with a vengeance and, FISH ON! We could tell this was a  nice fish as it made a hard run and ripped some drag. Tenniel kept the pressure on, forced it out from under the  boat a time or two, worked it around the trolling motor (with some help from Jasek) then brought to the boat a respectable 24" Slot Redfish - boy what a battle!

And the fish bite continued. Alex got on the board with a nice keeper sized Seatrout catch and then Jasek did too. Bill landed a couple and it turned out to be a good flurry of fish catch'n. When it finally slowed we fished a couple of other marsh lines but the fish were done, so we called it a day, another great one to be fishing here at Amelia Island, Florida.
Posted by Anglers Mark at 6:37 PM