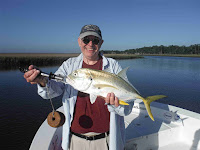 Today was about the prettiest day we've had in over a week!  I had met Bob Blalock out at the Goffinsville Park boat ramp and with a live well full of live shrimp, we eased just down the river to fish the outflow of Christopher Creek on an outgoing tide.  Bob had made a perfect cast with a float rig to the other side of a point of grass and both of us saw his float go slowly under. I thought for sure it was a fish, Bob thought it was, but when he tightened up it seemed like he was hung. After a few tugs he handed it to me and I tightened down on it - it move - then it felt like a fish. A Big Fish!  I handed back 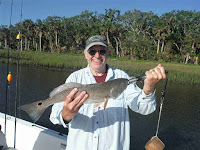 the rod to Bob and the fight was on! It came around the point and headed for deeper water and...BAP! "It" was gone!  Bob and I both speculated thru the entire trip as to what the fish was, but we'll never know!

We worked on up the creek and soon Bob had another Strong hookup. This was a different kind of fight - a good one, but different. After a good battle, Bob landed a big Jack Crevalle.

The tide was getting down so we headed back to Seymore's Pointe and fished some docks with jigs and shrimp and here we got into some good fish. Bob pulled at least two Slot sized Redfish from the pilings, a couple of feisty Reds, and a Black "puppy" Drum or two. After yesterday's breakoffs, I had set up two rods with 15#braid and 20# Fluorocarbon leader. We were ready!

We made our last stop down at Broward Island, drifting with the current, tossing jigs. There wasn't a whole lot of fish bites but Bob did hookup with one, up near shore. The fish got in behind the boat and into the current and put up a good fight. Eventually he landed another Slot sized Redfish. We drifted back, fishing a good half mile, but even though we could see some movement along the shore, we had no more takers(other than another small Jack), so we called it a day, another great one to be fishing here at Amelia Island, Florida.
Posted by Anglers Mark at 6:12 PM