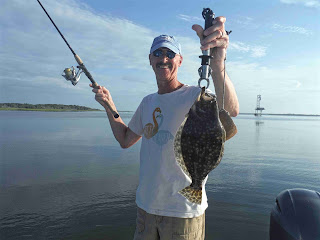 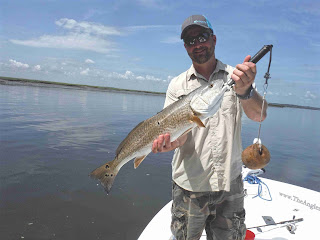 It was another beautiful morning yesterday when I met Brian Shuford and his father-in-law Mike up at the Dee Dee Bartels Park. We made a quick trip over to the outside of Tiger, set up with some float rigs and live shrimp, and began to work along a bank on an outgoing tide. The oysters were already beginning to show and we were fishing some shallow water. Mike "knocked the skunk off" when his float disappeared and he hooked up with a nice keeper sized Seatrout (all fish caught were released today).  Later, Mike's float slowly went under and we landed the fish, sure enough, it was a Flounder, another of keeper
size.

We fished a runout further up the island with jigs and mud minnows but had no luck so we bounced around to the Jolly River and fished some exposed oysters, sticking with float rigs. Mike put the first Redfish in the boat then Brian tangled with a high flying Ladyfish.  We then ran up to Snook Creek and picked up another Trout and a Black "puppy" Drum. We finished fishing Jolley at the MOA and Mike added a couple of small Trout.

Our last stop was back at Tiger, fishing jigs on the last of the outgoing tide. Mike landed another Redfish then Brian had a strong bite and, Fish On!  This was the biggest fish of the day, ripping drag and digging deep, but Brian kept the pressure on and soon landed a "Tournament sized" Redfish 26.5". Before we released the fish we saw that it had been hooked before and had some tackle hanging out of it's mouth, so we cut it loose and set it free. It was a great way to wrap up a fun fishing trip here at Amelia Island, Florida.
Posted by Anglers Mark at 10:29 AM