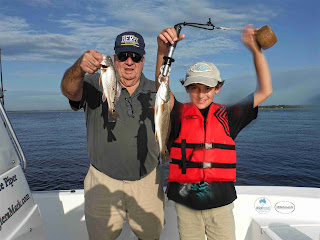 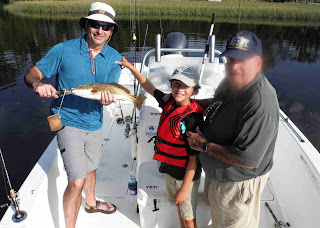 It seems like I've made Sawpit Creek my "home port"!  I met David Ehrler, his son Jack, and his dad Rich down at the south end ramp early this morning and we headed up the Nassau River and made the slightly longer run around to Pumkin Hill to set up with float rigs and minnows while David cast the fly rod off the stern. Neither live minnow or imitation shrimp fly picked up anything until we worked our way around to a point and BOOM! Both Rich and Jack had simultaneous hookups. They both reeled in a feisty Redfish to "knock the skunk off" and get a double, to boot!

We worked and edge in Pumkin, then ran over to Christopher Creek and switched to jigs. David had made an excellent cast to some rocks and after hookup, his drag began to sing. We knew it was a nice fish. David kept the pressure on and patiently worked it to the boat and landed a good Slot Redfish - his first. The tide was already going out so we skipped out of there and around to Seymore's Pointe.

I had made a "demo cast" and I as I handed the rod off, the float disappeared. Young Jack was on the rod and he fought the fish valiantly. The fish made a run or two but it was no match for Jack and he soon landed another nice Redfish.

We fished the Nassau River where David added a keeper sized Flounder to the catch, then he landed a Seatrout to round out his Amelia Island Back Country Slam, then Rich and Jack wrapped things up with another "double" this time hungry Seatrout. Everyone caught fish and we had some nice ones, so we called it a day, another great one to be fishing here at Amelia Island, Florida.
Posted by Anglers Mark at 5:30 PM