Out of the Park 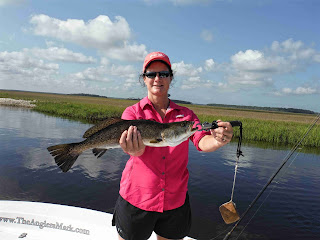 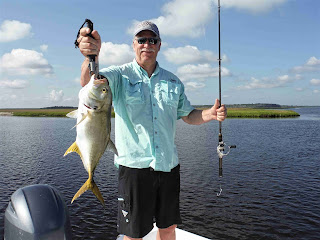 After a day off and a good day of rest, I was back at it today, meeting Dana and Julie Simmons down at the Sawpit Creek boat ramp early. We made the 15 minute run up to Jackstaff and began tossing float rigs and live shrimp with the tide still coming in. The first stretch of marsh didn't produce much but the second did. Between the two anglers, they caught a couple of hard fighting Jack Crevalle, a couple of Bonnethead Shark, and a Catfish.

We buzzed thru Horsehead and around to Pumpkin Hill and stuck with the float rigs for while. But when we got to a stretch of clear
bottom we switched to jigs and shrimp and within minutes, BOOM! Julie had a big fish on. She played it patiently and when we saw it flashed we all thought, "Slot Red", but as she worked it to the net we saw that it was a huge Seatrout, which we landed. It measured at 22", the biggest Trout caught to date on the Anglers Mark, knocking the competition "out of the park" to garner 1st Place in the 2018 Anglers Mark Bragging Rights Tournament -Seatrout Category (scroll down the right side of this report for standings).  And shortly after that, Dana had a strong hookup. Again, I was thinking big Red, but when it never "boiled", I had some doubts. Dana fought it valiantly and eventually landed a massive Jack Crevalle. We worked the bank thoroughly, then headed out.

Our next stop was back at Seymore's Pointe, floating shrimp along some rocks and although we had nibbles, we had no takers.  We finished pitching jigs to dock pilings but were feeding the bait stealers, so we called it a day, another great one to be fishing here at Amelia Island, Florida.
Posted by Anglers Mark at 6:35 PM