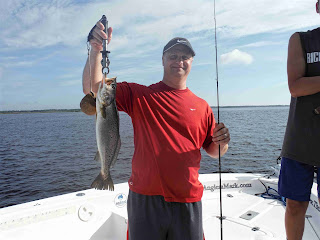 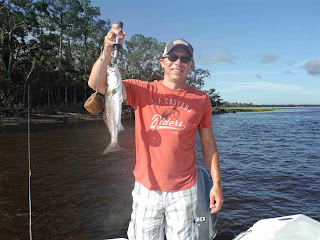 I wrapped my week up fishing with David Foster and his friend Tim and Tim's son Mathew, meeting them down at the Sawpit Creek boat ramp early this morning. The tide had been coming in for an hour or so but the oysters were still fully exposed and I though for sure some dock pilings would be holding fish. We ran up the Nassau River and set up current from a dock and began to pitch jigs and live shrimp to the pilings. Guess what - the Croaker are here! We picked up a few, a bait stealing Spot, a slimy Catfish, and had one feisty Redfish to the boat for a "quick release" - but no big fish.

The tide was still somewhat low so we ran down to Broward Island, fished the north end with jigs, then moved down to the south end and fished the logs. Tim had a hookup - dang it - just a Toad Fish - but we kept working the bank, tossing up current, and it paid off. Tim had a strong bite and we knew it was big when the drag began to rip. He played it perfectly and we soon landed a big Seatrout that was just shy of 20" -now that's a nice fish!  And shortly after that David hooked up and he too put a keeper sized Seatrout in the boat. We did land a small Redfish along the bank.

Our next stop was up at Pumpkin Hill, drifting float rigs and shrimp along the marsh grass. David got hot, landing a Bonnethead Shark and a big Ladyfish - the "poor man's Tarpon". We had another couple of small Reds and a small Seatrout.  We fished Christopher Creek for a bit with jigs -and again, a small Red, then called it a day, another great one to be fishing here at Amelia Island, Florida.
Posted by Anglers Mark at 9:02 PM