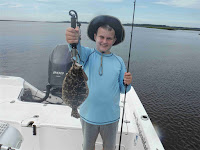 The Owensby's were back in town - Tom and his son Kevin and grandson Jake - and we fished the early morning here at Amelia Island. I met them up at the Dee Dee Bartels Park and with the tide just starting in, I thought it'd be best to start fishing the logs at Tiger, a perfect tide to fish. Although we did pick up some small fish - Trout, Drum, Flounder, and Reds (a Grande Slam!) the anglers spent most of their time feeding "baitstealers", getting a nibble on almost every cast. After fishing the bank up and down, we moved on. 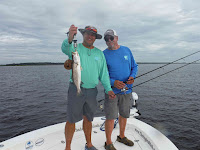 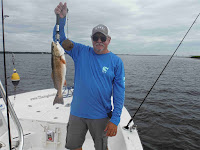 Our next stop was up at Jolley Bank and after easing along, tossing up current with jigs and live shrimp and working a float rig out the back, we hit a "hot spot". Kevin put a big Seatrout in the boat, Jake added Redfish, then Tom had a strong bite, and Fish On!  He played the big fish patiently and when it ripped drag a few times we know he had a nice fish on. And when rolled we know it was a big Redfish!  After a good battle, Kevin netted the 23" Slot Fish.  We tangled with a couple of Ladyfish, added another Seatrout then moved on up the River.

Fishing Snook Creek, we didn't get a whole lot of bites but when Jake's float slowly went under, he lifted the rod to set the circle hook and caught a nice keeper sized Flounder. We went back to the outside of Tiger and fished the edge of a flooding oyster bed and BAM! Multiple hookups quick. Jake and Kevin landed Seatrout, once of which was of keeper size, Tom battled a Ladyfish, then he had a real battle with a Bonnethead Shark, then, like someone turned a light switch off, the bite was gone.

We made one final stop back at the mouth of Tiger and even though there was a lot of bait movement there wasn't much action, until Tom caught one last fish, a keeper sized Flounder. It took all trip but we slowly put together a "mess" of fish so we counted it as another great day to be fishing here at Amelia Island, Florida.