Cold and Windy But The Fish Were Biting 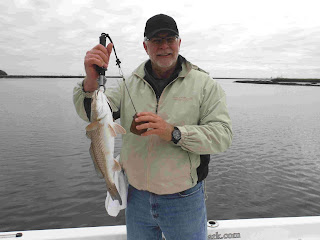 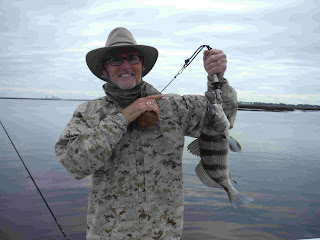 Someone forcast that the sun would come out today, and it did, but just for about 30 minutes! I had met Mark Laurint and his long time friend Rick up at the Dee Dee Bartels Park boat ramp and with a west wind predicted, we headed over to Lanceford Creek to fish some dock pilings and be out of the wind. I think it was the 2nd cast when we had a bite, a hookup, and Mark reeled in a small but feisty Black "puppy" Drum. The two anglers went back to the same area and Rick hooked up, had his drag rip a few times, then he worked a keeper sized 18" Black Drum to the boat. Skunk off! We fished the same dock for a while and had a few feisty Redfish then Mark put
a Slot sized one in the boat.

When things slowed we moved down a ways and really got into some Redfish. Most were undersized but we ended up getting two more Slot fish. We picked up a couple of Seatrout, one of which was keeper size, then we made a run.

Our next stop was over at Tiger Island fishing the first of an incoming tide - a great time to be there.We pitched between the logs with jigs and live shrimp and had a bunch of nibbles but no takers until Mark landed another feisty Redfish. Then both anglers began to fish deeper and further from the bank and began to hookup small but fun to catch Seatrout.  We also had our first Salt Marsh Mink sighting of the year! The sun came out briefly and warmed things up nicely before disappearing behind the clouds, but we called another great day to be fishing here at Amelia Island, Florida. 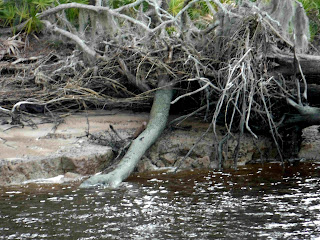