Competing With The Dolphin 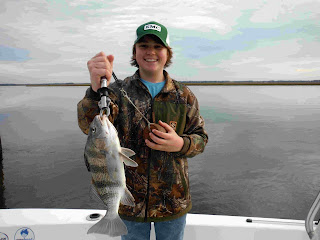 We got a good trip in today before the front came thru. I had met Bubba and Kim Curry, their son Matt an his friend Cole down at the Sawpit Creek boat ramp early and we headed up the Nassau River, all the way to Christopher Creek with plans to fish the high tide before it started out. All four anglers were pitching jigs and live shrimp to some dock pilings and rocks. We fished it pretty good but I don't think we had a real bite the whole stretch.

We came out and ran down to Seymore's Pointe and set  up between some docks and boy, this did the trick. Both Kim and Bubba were fishing off they stern and they began to get Seatrout one after the other. Then Matt and Cole, up on the bow, began to catch Trout, too. Every once in a awhile one of the anglers would put a keeper sized Trout in the boat. Then, as the tide got down a bit, they began to catch keeper sized Black "puppy" Drum. We move up and down the bank and caught fish until a big Dolphin moved in and began to crash the bank. It was like someone threw a light switch and the bite ended!

After running thru Horsehead over to the mouth of Jackstaff, we worked an marsh lined bank to no avail, then fished a sandy point, and again, no fish. We came back thru Horsehead and again fished some docks at Seymore's and picked up a couple  of more Trout before we called it a day, another great one to be fishing here at Amelia Island, Florida.