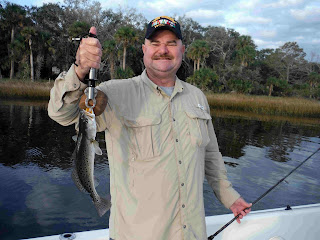 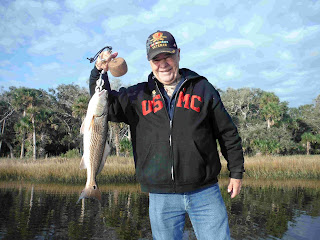 When I stopped to get ice early this morning I found a penny, heads up, in the parking lot and I thought, "I hope this bodes well for the fishing today".  I met William Redfield and his Uncle Cliff out at the Goffinsville Park boat ramp and we skipped around to Christopher Creek - the tide had just started out and I figured we had at least an hour that we could fish before we needed to get out of there.  We worked along some docks and although it took awhile, William finally found a bite, a hookup and a nice feisty Redfish. We worked it for a while and added a couple of more Reds and a couple of Trout.

After we came out we ran down to Seymore's Pointe and fished some marsh grass on the outgoing tide. Things really picked  up - both anglers began to catch one Seatrout after another, drifting live shrimp under floats and then they landed a Red or two. William put a couple of keeper sized Trout in the boat then Cliff stepped up strong when he hooked up, battled patiently, and landed a Slot sized 21' Redfish. He followed that up with a  keeper sized Black "puppy" Drum.

We fished a couple of spots at Spanish Drop but had no real bites so we cruised down to Broward Island and worked some logs with jigs and shrimp and found a couple of more Redfish.

The fishing was really good the first two hours of the falling tide, but after that, not so much. But it was a beautiful day to be out on the water so we counted it as another great one to be fishing here at Amelia Island, Florida
Posted by Anglers Mark at 8:13 PM