Russ Henry was in town with his family, visiting Amelia Island from Valdosta, and took in a fishing trip with his four sons, Whiddon, Carter, James, and Will. I've seen the "ah-huh" look in folks eyes when I tell them we're catching 20 Redfish, or 25 Redfish in a four hour trip, but it's the truth! Granted, there's not much size to them, but they're fun to catch, hitting hard and putting up a robust fight. We left the Atlantic Seafood dock promptly at 7am and headed up to Jolley River, anchoring at a good runout. 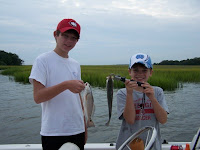 Whiddon got the ball rolling by hooking up with a nice looking Seatrout, then all the others joined in catching Trout at first, then Redfish must have moved in and it was non-stop catching for about an hour or two. Luckily, Russ was helping out as "first mate", de-hooking fish and running bait on one end of the boat while I was re-rigging, snapping pictures and netting fish! More than once did we have a "double" hookup going at the same time! We moved on up the river to find more Redfish, Trout and a we had a couple of nice fights with Bonnethead Sharks who were determined not to be boated. 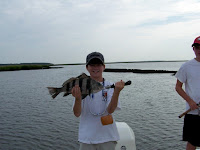 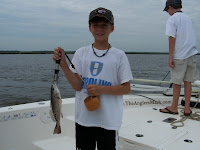 We made one more stop at the MOA (Mother-of-all) spots where we ended the day with a "moneyfish" 17-spot Redfish. Guess where I'll be stopping during next year's Spot Tournament? With the "moneyfish" in the boat, we called it a day, another great one to be out on the water! 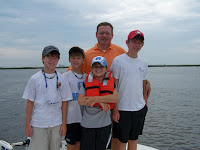