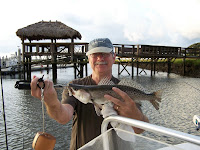 Robert and Elizabeth Torregrossa were visiting Amelia Island from the Maryland area and took in a backcountry fishing trip along with their friend, Norman. We left the Atlantic Seafood dock 7am sharp, with cloudy skies and already gusty winds. The weather report called for a partly cloudy day with wind 15-20mph and gusts up to 25, and I think the weatherman nailed it! We hit the Lanceford Creek docks with the tide just starting back in, pitching our jig/shrimp combo up to the pilings. Although the "bite" seems to have slowed from weeks past, Robert did have something nail his bait half way back to the boat and he had a good fight on his hands. He played the fish expertly with the Shimano 1000FI reel spooled with Power Pro braided line and soon brought a nice 18" Trout to the net! Elizabeth and Norman both had good hookups with the fish fighting to stay on bottom, and they boated some pesky Stingrays. We moved to another dock where Elizabeth found the hot spot, catching 3-4 small Redfish and then Norman joined in, adding a couple of more small Redfish to the fish count. The wind was really blowing now so we headed to the shelter of Tiger Island; 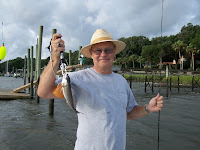 I dropped the trolling motor and we made a pass with the anglers getting some bites, but no hookups. I anchored up near shore and it wasn't long before Robert caught a Flounder, completing their "inshore slam", and Elizabeth pulled in a Croaker. We fished "Manatee Creek" briefly, to be treated to a brief sighting of one Manatee, then move around to the front of Tiger Island and anchored. 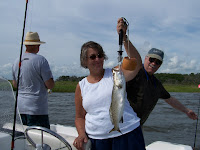 All the anglers joined in on some action, battling a few more small Redfish, a few small Trout, a couple of Snapper, then Elizabeth topped it off by hooking up to and landing a nice 19" Trout! We had used up all of our live shrimp so we called it a day, another great (although windy) one to be out on the water!
Posted by Anglers Mark at 5:02 PM