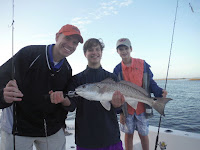 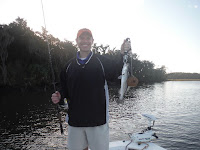 With the Christmas holiday in our rear view mirror, we were able to get back to some fishing here at Amelia Island. I met Todd Standley and his two sons Linus and Xander down at the City boat ramp early this morning and we headed up the river to fish Tiger Island as the tide came in. There were still some logs showing and I think it was our first cast when Linus reeled in a hungry, keeper sized Seatrout. That's the way to start a fishing trip! We fished the area, up and down and both Todd and Linus put a few more Trout in the
boat. Then Linus had a strong hookup and BOOM! Fish on!  He played the big fish perfectly and kept the pressure light when it got back into the current. After a good battle he landed a nice 25" Slot Redfish. Later, Xander had a good bite and he too had a fish on. He played the fish all the way to the boat and then did a "quick release" of a nice keeper sized Flounder. Then Linus add a Flounder of his own to round out his very own Amelia Island Back Country Slam of Seatrout, Redfish, and Flounder.  The tide had gotten up so we fished the outside of Tiger and here Todd put a couple of more Trout in the boat using a float rig and live shrimp. Our next couple of spots produce no fish and when the wind picked up we finished the day over in Eagans Creek where Linus wrapped the day with another Flounder. With that, we called it a day, another great one to be fishing Amelia Island waters.
Posted by Anglers Mark at 7:39 PM