Wrapping Up a Great Year of Fishing 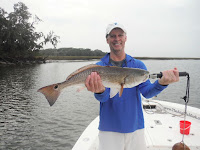 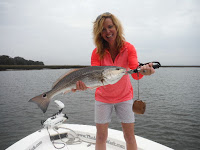 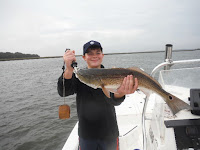 We had another great day of fishing to wrap up a great week and a great year of fishing here at Amelia Island. Jeff Wood, his girlfriend Virginia and her son Will fished with me this morning, meeting me down at the Atlantic Seafood dock on the very first of an incoming tide. There was just enough breeze to keep the no-see-ums off as we pulled in to our first spot. There were ideal conditions with the tide creeping in and all three anglers were soon pitching 1/4oz jigs with shrimp or mud minnows to the bank. It was not  a "fast and furious" kind of morning but it was packed with quality fish when they bit!
Jeff got it started when he hooked up and landed a nice keeper sized 18" Black "puppy" Drum (all fish were released today).  Then he followed that up with a big Slot sized 22" Redfish.  We fished the area thoroughly, working our way thru  tons of  "baitsealers" then Virgina had a hookup and FISH ON! She played the fish perfectly and after a good battle, landed an even bigger 25" Slot Red. Shortly after that young Will had a good hookup and he too had a big fish on.  He worked the big fish patiently to the boat and we netted the biggest Redfish of the day, a nice 26"+ fish. Other than the
baitstealers, the anglers landed four fish and all of them were of keeper size. The wind had picked up so we ran around to Oyster Bay and fished the Tiki hut but had no real bites. Our last stop was around at a grass patch in Lanceford Creek with the tide still coming in. We switched to float rigs and our first cast produced a keeper sized Seatrout that Will landed like a pro. From then on all three anglers were catching fish - a Trout here and a Trout there. They caught about 10 of them and 3-5 of those were keeper size with the biggest being about 18". With that we called it a day (and a year) another great one to be fishing here at Amelia Island, Florida.
Posted by Anglers Mark at 5:01 PM