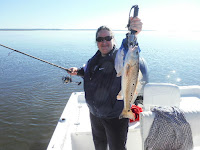 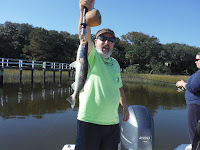 The weather forecast this morning was predicted to be a "10" and they nailed it - a outstandingly beautiful day - sunshine, mild temperatures, and just a slight breeze. I had met Davis's - Ed and Tricia and their daughter Kristen down at the Big Talbot Island Park boat ramp and we made a run up the Amelia River to dip into Jackstaff and fish a high tide that had peaked at 7:30am and had just begun to flow out. The anglers were tossing mud minnows under float rigs and it wasn't long before Kristen "knocked the skunk off"
when she landed a hungry Seatrout. We worked the shoreline slowly and every once in a while they'd get a nibbler then Ed put a nice sized Blue in the boat. We crossed the creek, fished another marsh line, and here they picked up a pretty good handful of "almost keeper sized" Trout. We made the run around to Seymore's Pointe and I think it was one of the first casts when Kristen had a strong bite and FISH ON! She played the fish patiently and after a good battle landed a nice Slot sized Redfish that had 10 spots on it. We had one more good bite there then moved around to fish a dock and here they picked up another small Trout or two.  We ran down to Broward Island and both Ed and Kristen picked up a Redfish with Kristin's having another 10 spots on it. Tricia got on the board when she boated a Seatrout and we wrapped up the trip with the anglers landing a handful of Trout. With that, we called it a day, another great one to be fishing Amelia Island waters.
Posted by Anglers Mark at 7:02 PM