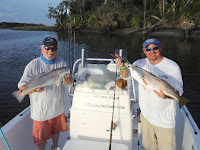 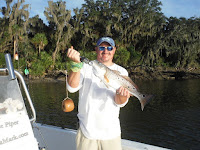 I had a window of opportunity to fish with some friends, Tim Parker and his brother Brian Knicely this evening so we met at the City marina and ran up Lanceford Creek to fish the first of an outgoing tide. We hit a small grass patch first, tossing shrimp and mud minnows under floats but we had no takers. We then fished some dock pilings and picked up one small but feisty Redfish. We had one more strong bite that broke us off in the pilings but after that there were  no more real bites, even though the tide was getting
down and conditions were ideal. We made a run around to Tiger Island and with the logs exposed we again worked the jigs. Tim struck first when he put a keeper sized Trout in the boat. He also landed  a couple of small but fun to catch Flounder then it was like someone turned a light switch on - BOOM, FISH ON!   BOOM, FISH ON!  BOOM, FISH ON! We caught fish after fish. Sometimes it would be a big Slot Redfish and sometimes a nice keeper sized Seatrout. We ended up with 5 Slot sized Reds, threw back a good handful of smaller ones, and had 5 keeper sized
Seatrout and a bull Whiting. Brian added a small Black "puppy" Drum to round out an Amelia Island Back Country Grande Slam and a great day of fishing here at Amelia Island, Florida.

I can honestly say I have NEVER had a bad day on the water with Capt.Piper.IF my little brother can tag a long it's even better.Can't say thanks enough for being blessed with such a great friend.I can get him a seat in the Gator/Taxslayer Bowl.LOL IF anyone is considering a guide in the Amelia area I would point you to Capt Lawrence Piper and the Anglers Mark.ANOTHER great day on the water.What a way for me to get back in the saddle after a year with a bad back! Thank you Sir!!

WooooooW !! Great "Fun Fishing at Amelia Island" !!!!!
........what a beautiful fun fishing !!!!!!!!
I have read your this great fun fishing post and
enjoyed so much with my friends!
Thanks for sharing your great fun
Fishing post!