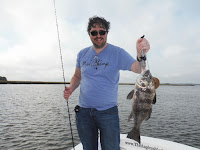 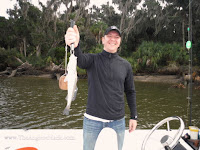 We had a low tide that had just started back in when I met Brian Cochran and his friend Phillip down at the Altantic Seafood dock today. There was just a slight breeze and overcast skies as we headed north to fish Tiger Island with jigs and live (kinda) shrimp. It was somewhat slow fishing although both anglers had a couple of good bites, fish on for a while, then off. Ouch.  But they persevered and when Brian had a strong hookup we knew it was a nice fish as it bulled its way deep and fought to keep from coming to the surface. But Brian kept the pressure on and after a good battle
landed a nice 22" Black "puppy" Drum. Shortly after that Phillip put a keeper sized Seatrout in the boat. We had one or two more Trout here then ran around to the Jolley River to fish the now covered oysters with float rigs and live shrimp. The wind had picked up which made for some difficult fishing - and the fish didn't cooperate, so we continued further around and into the Bell River to fish some docks. It was almost immediately that we had hookups with hungry Trout (back to fishing the jigs) and we had one on a jig and grub, white with red tail. Our last stop was back near the marina where Phillip caught a small Flounder to round out the duo's Amelia Island Back Country Slam of Drum, Seatrout, and Flounder. With that, we called it a day, another great one to be fishing here at Amelia Island, Florida.
Posted by Anglers Mark at 9:32 PM