4th Spot is the Charm 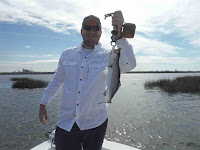 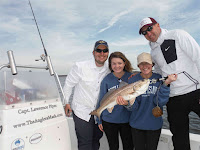 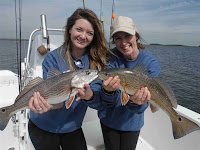 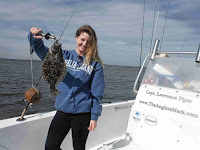 We had a cool morning today but it was fairly clear and we expected the sun to warm things  up. I was fishing with Bryce Mitchell and his friends Brady and Daniel and Jessica, meeting up at the Dee Dee Bartels Park and heading over to Tiger Island to take advantage of the first of an incoming tide. The anglers were tossing jigs and live shrimp and it may have been Jessica's first cast when she hooked up and landed a nice keeper sized Seatrout. That was too easy! But it got tougher after that - we worked up and down the
bank and found, not a single Redfish! Very unusual. But Daniel outsmarted a couple of Black "puppy" Drum and Jessica added another keeper sized Trout.

We ran to Soap Creek and fished some piling with jigs but had no takers. We ran to Lanceford Creek and fished some flooding marsh grass, but had not takers. Our 4th stop was back at Bell River and here things got wild and crazy!  I think Bryce may have put a couple of small Redfish in the boat when Jessica, after letting here
float and shrimp drift into a small pocket, had a big boil on her bait and, BIG FISH ON! This fish was pulling deep and hard but Jessica kept the pressure on. She worked it in slowly and soon Daniel scooped it up, a 26.75" Tournament sized Redfish, boy what a fish!

We continued to work that shoreline and it was a feast. The group landed small but feisty sized Redfish, Bryce added a keeper sized Trout, Brady added a keeper sized Flounder (to make it a Amelia Island Grand Slam of Trout, Redfish, Black Drum and Flounder)
then both Jessica and Brady had strong hookups. They were side by side and both expertly reeled in some identical Slot sized 20" Redfish!  Then Bryce added another Slot fish. This was some hot fishing!  But things finally slowed, and after hitting two more quick spots we called it a day, another great one to be fishing here at Amelia Island, Florida.