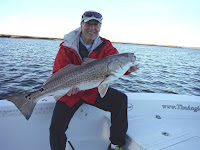 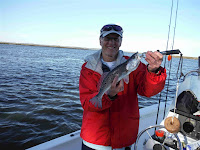 March winds are really aggravating! But Tom Hardy and I had a plan and that was to meet early this morning when the winds were still right at 10mph and buzz over to Tiger Island to fish the first of an incoming tide with jigs and live shrimp. We had only been set up for a short while and with Tom making excellent casts, BOOM! Redfish on. He played the feisty Red perfectly and after pictures, we tossed it back (all fish caught today were released).

Tom continued to fish the pockets, picked up a few fish, then
BOOM! BIG FISH ON! And boy what a fish! Tom had to gamble and "horse" the fish away from the downed limbs but once he got it out to deep water he could take his time, be patient and let the rod bend do all the work The big fish dug deep a good handful of times but Tom was up to the task and eventually landed a....2018....Anglers Mark.....Bragging
Rights.....Leaderboard....Oversized 33.25" Redfish!  Scroll down the right side of this report for standings. This was a huge fish to catch on light tackle spinning gear. It was photographed and 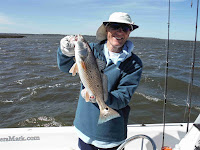 We continued to fish the bank, catching a couple of more Reds, a few Seatrout, and one small Flounder before the west wind picked up and drove us away.  We fished a tad bit in Egans Creek, then ran up to Lanceford Creek and fished some docks, but had no luck at either place. We were protected from the wind in Lancford, but the fish weren't biting, so we ventured back out into the wind, running to Bell River to fish some flooded oyster beds. And things heated up!

The wind was howling but it was come from behind us so all Tom had to do wasto  toss his float rig accurately towards the grass and let the wind take it. He had some good drifts along the grass and it paid off with four more Redfish, a Seatrout and another Flounder, all in quick succession.  It was really blowing but we left the fish biting and counted it as another great day to be fishing here at Amelia Island, Florida
Posted by Anglers Mark at 10:55 PM