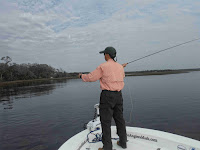 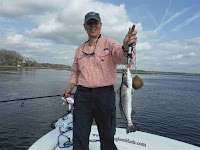 I was down at the south end this morning, meeting Mills Gallivan early and running up the Nassau and into Christopher Creek to take advantage of the last of an incoming tide...and some wind blockage!  Mills started off tossing a fly, blind casting to some marsh grass, and even though he was making excellent casts, we had no real bites. We trolled the bank and switched to spin and live shrimp on a jig and this did the trick. Mills picked up a handful of hard fighting Redfish. After a couple of passes we came out of the
creek and ran back to the Seymore's Pointe area.

The tide was coming out of the marsh and we set up at a grassy pointe that was a perfect ambush spot and sure enough, the Seatrout were there. As long as Mills got a good drift we both expected a bite as his float came across some flooded oyster beds and, BOOM! Float down, fish on! Mills landed a good handful of Trout, many over 15, and a few over 17 (all fish were released today).  We thought we might try some other areas and maybe get some bigger Redfish so we moved on and fished some dock pilings with the jigs, but to  no avail. We left the protection of the land mass, got out into the wind and tried the floats again, but quickly realized that it was a bad move.

After fishing some more docks with the jig, and picking up one more Red, we called it a day, another great on to be fishing here at Amelia Island, Florida.
Posted by Anglers Mark at 4:27 PM