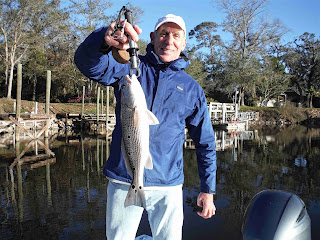 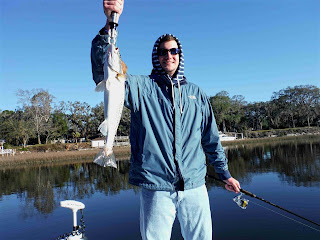 The wind has finally subsided and today was an absolutely beautiful day to be out on the water!  I met Murray and Dan Bonitt down at the Sawpit Creek boat ramp and I thought it would be a great day to try our luck out at the small jetty on the south end of the island with a very light west wind blowing. Didn't work. We ran out and fished it briefly and even though the swells were not too bad, we had not a single bite on jigs and shrimp so we buzzed back around and headed to the backwaters.

Our first stop was up Christopher Creek and as we fished some docks the two anglers finally began to get some good bites. Dan was the first to strike when he landed a feisty Redfish (most all that were caught today will probably be in the Slot in another month!). He added another then his dad, Murray hooked up and landed. We worked our way around bend and got into a sweet spot when the two anglers caught and landed a handful of Reds, then Dan had a good bite, his drag ripped, and we thought, here's a Slot Red! But after Dan expertly worked it to the net, we found it to be a big 20" Seatrout, caught shallow over a mud flat!  This is the 2nd biggest Trout caught on the Anglers Mark and moves Dan into the 2018 Bragging Rights Tournament (scroll down the right side of this report for standings).

We caught another fish or two then headed out to fish a flooded grass line along the Nassau River with float rigs and live shrimp. Dan landed one trout before we moved on. Our next stop was around along some of those rocks that line the Nassau River and here, while Dan was fishing a fixed float, Murray switched to slip float and that proved to be the difference. Dan landed a good handful of Reds, fishing about 8' deep along the rocks.

Our final stop was around at Seymore's Pointe and we wrapped up the day, landing a good many Seatrout with two of them being of keeper size, one of which, caught by Murray, was right at 18" - a great fish catch to wrap up another good day of fishing here at Amelia Island, Florida
Posted by Anglers Mark at 6:44 PM