Finishing With A Big Bang 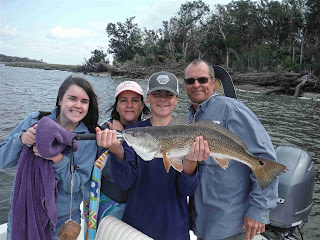 Oliver - meeting them up at the Dee Dee Bartels Park boat ramp with plans to run over to Lanceford and fish the bottom of an outgoing tide.  But Soap Creek was looking pretty good so we dipped in and started tossing jigs and live shrimp to some exposed oysters. I don't think we got a bite!

Our next stop was way up Bell River and this did the trick. Todd got hot quick and put a couple of Trout in the boat, the first being a fat keeper sized fish (we eventually let it go) then Oliver got on the board with a Trout, and Betsy reeled one in, too. We worked the docks up and down and picked up a fish here and there until it appeared the tide was almost at a standstill.

We continued on, making a brief stop at the MOA to no avail, then hit Jolley Bank and fished it from point to creek and again, no bites.

The wind was picking up out of the west and even though there was a good chance fishing Tiger may be a bust, we headed there anyway because the tide was perfect as it had just started back in. Oliver cam alive, landing an "almost legal" Redfish, then a nice Whiting. Todd added a small Black "puppy" Drum to round out their Amelia Island Backcountry Slam" then we had a strong hookup and, BIG FISH ON! This fish was ripping drag and not wanting to budge off the downed logs. But Oliver was up to the task and he patiently worked it to the boat, let it run, worked it to the boat, let it run and eventually landed a 26.75" "tournament" sized Redfish, boy what a fish. Now that's the way to wrap up another great day to be out on the water fishing here at Amelia Island, Florida
Posted by Anglers Mark at 10:41 PM