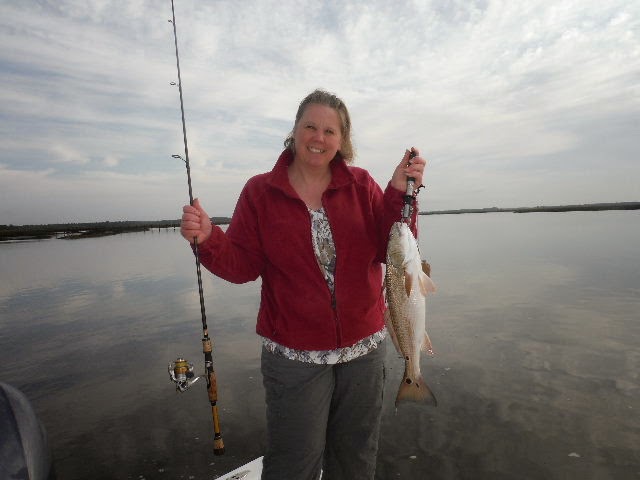 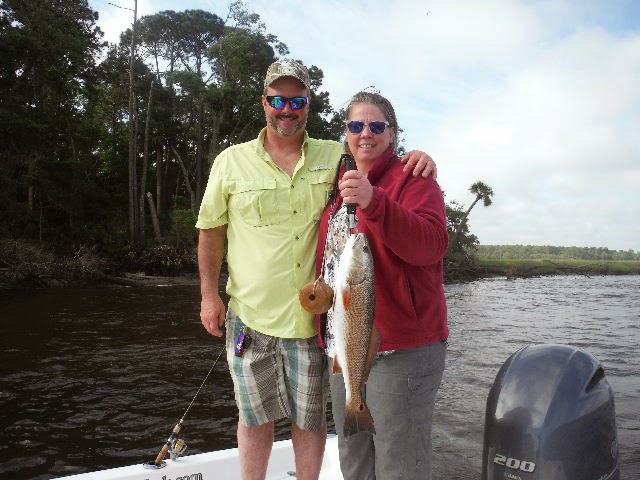 After being down for two days due to thunderstorms I was chomping at the bit to get back on the water today. I met Russ and Adrienne Futrell down at the Big Talbot Island Park boat ramp and we headed up the Nassau River, making our first stop at some docks to fish the first of an incoming tide. The two anglers were on the bow of the boat, tossing jigs and live shrimp to the pilings and it only took a few casts before both of them had a hookup at the same time! We had  double to "knock the skunk off"!  Russ landed a nice feisty Redfish and Adrienne put a keeper sized Black "puppy"
Drum in the boat. We continued to fish and the two caught a handful of keeper sized Mangrove Snapper- the first of the year, then Adrienne had strong bite and the fight was on! She played the fish patiently and went from the bow to the stern. The big fish dove under the boat but Adrienne kept the pressure on and pulled it back out. After a long fight, she landed a nice 23" Slot Redfish! Russ landed a Flounder to tally the duo an Amelia Island Back Country Slam of Black Drum, Redfish, and Flounder, then Adrienne upped it to a "Grande" Slam when she put a keeper sized Seatrout in the boat. We made run down to Broward Island where they caught another Slot Redfish and a Sheepshead. Our next stop was in Christopher Creek where they picked up a keeper sized Flounder and then we made one final stop in Jackstaff where they found a Seatrout and a couple of hard fighting Jack Crevalle. It was a beautiful day of fish catching to be out on Amelia Island waters!
Posted by Anglers Mark at 9:16 PM