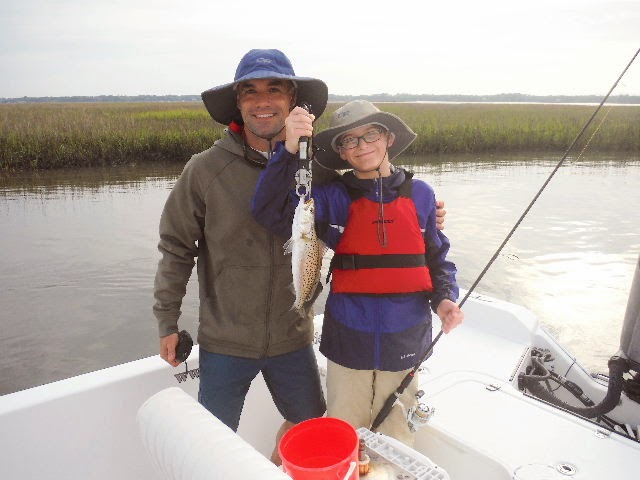 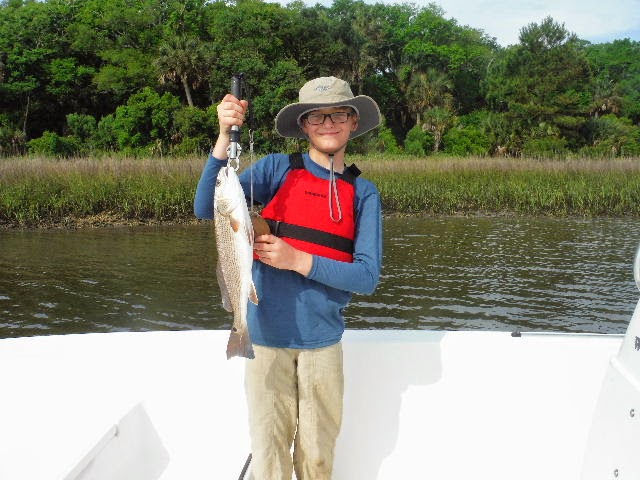 The thunderstorms were forecast to come in later this afternoon so we went with the scheduled trip to fish with Rob Becker and his son Isaac this morning. I met them down at the Big Talbot Island Park boat ramp and we headed up the Amelia River and into Jackstaff to fish the first of an outgoing tide with float rigs and live shrimp. I believe Rob knocked the skunk off early when he boated a hungry Seatrout, then another, but Isaac followed it up with a hard fighting fish, which he landed - a nice feisty Redfish- his first. We continued to fish the stretch of marsh grass and both anglers were catching
Seatrout regularly. We switched to jigs and shrimp, fished a sandbar, and found that we could catch Seatrout at will.  Eventually, we made the run through Horsehead, found a dock to fish, which we did for a while, with no real bites. It wasn't until we got ready to leave when Isaac made a nice cast up near a piling and it had no sooner hit the bottom and BOOM! FISH ON! Isaac played the big fish patiently and after a good battle landed a nice Slot Redfish! We moved on to fish Bubblegum Reef, found a Seatrout, then made the run down to Broward Island where the two anglers picked up a handful of more Trout. We'd caught a bunch of fish early, had a big fish landed, so we called it a day, another great one to be fishing Amelia Island waters!
Posted by Anglers Mark at 9:34 PM