First and Third and Tied 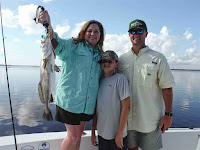 We got an early start down at the Sawpit Creek boat ramp when I met the Allen family, Cami and Glen and their son Walker. There was just a slight breeze as we ran up the intercoastal and made a stop at the mouth of Jackstaff. The trio of anglers were pitching jigs and mud minnows - no shrimp today on the very last of an outgoing tide, and boy was it low! We worked up the bank and it seemed like Glen was going to be the only one catching fish! He boated an ugly old Toad Fish, a Catfish, and a Whiting at that first stop, giving him a tally of three fish. 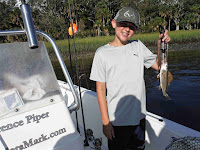 After buzzing thru Horsehead we fished some docks over at Seyomore's Pointe and here Walker hooked up and expertly reeled in a feisty Redfish. We bounced around the corner and began fishing float rigs along some structure and I think Cami's first cast produced a bite and , Big Fish On! She played it patiently to the boat and landed a big 23.5" Seatrout, big enough to put her in 2nd place in the Angler's Mark 2018 Bragging Rights Tournament-Seatrout Category. After battling a hard fighting Jack Crevalle to 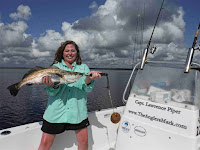 the net, we moved down the way and again Cami had a strong hookup. This was a big fish! Cami worked it to the boat and landed a BIGGER 27" Seatrout - the biggest of the year on the Anglers Mark (and coincidently, tied for 2nd in the biggest ever on the Anglers Mark).
For Bragging Rights standings, scroll down the right side of this report. Cami now holds First and Third place in the Seatrout Category. This gave Cami a tally of three fish.

We fished Broward Island for a bit and here Walker got back on the board with another Redfish catch and as we fished Pumkin Hill, walker reeled in an aggressive Blue Crab! This was Walker's third catch of the day - the anglers were tied! So we counted it as another great day to be fishing here at Amelia Island, Florida.
Posted by Anglers Mark at 6:21 PM