Young Anglers Top The Board 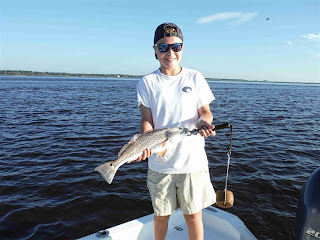 I wrapped my week up today fishing with the Rowland family, Michael and Heather and their two kids Jonah and Jesse. We met up at the Dee Dee Bartels Park boat ramp early and headed over to the Jolly River to fish the "bank" on an outgoing tide with jigs and minnows and live shrimp. We had been working up current for just a short while when Jonah, after making an excellent cast to the bank, had a strong hookup and, Fish On! Jonah played it perfectly, keeping the pressure on and working the big Redfish to the boat - we saw it "boil" a couple of times  - and we soon landed a nice 20" Slot sized Redfish. Skunk knocked off! 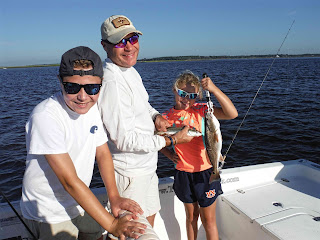 We continued to work the bank and picked up a couple of smaller Reds then Michael had a strange bite and a fish that wanted to stay on the bottom. He worked it slowly to the surface and we netted a keeper sized Flounder (all fish caught today were released). Michael added a hungry Seatrout to wrap up an Amelia Island Back Country Slam of Redfish, Flounder and Seatrout - and as he was fighting it Jesse had a hookup. She had made a pinpoint cast to the edge of the oysters and BOOM! Fish ON! She fought it valiantly and soon landed another Redfish that was right at Slot sized, boy what a fish! 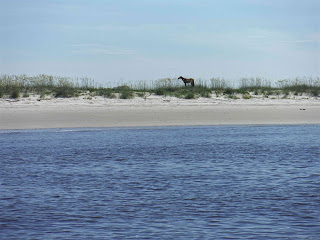 After running further up the Jolley we stopped at Snook Creek and here Jesse's rod stayed hot as she put a couple of feisty Redfish in the boat. She was neck and neck in the "fish count" with her dad but then Michael got hot. He put 2-3 Croaker in the boat then a hard fighting Black "puppy" Drum and now they had a "Grande Slam"! After easing around to the MOA Jonah caught his second breath and began to catch fish - a couple of feisty Reds and a Seatrout.

We fished Tiger logs briefly but the sun was up and it was getting hot so we did a short tour of the southern end of Cumberland and Ft. Clinch before calling it a day, another great one to be fishing here at Amelia Island, Florida.
Posted by Anglers Mark at 6:36 PM

We can't thank you enough for such an awesome day! We all had a blast! I appreciated the knowledge you passed on to us as well. Wonderful memories were made! We hope to visit again!