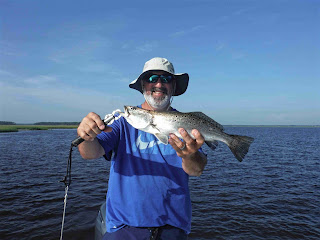 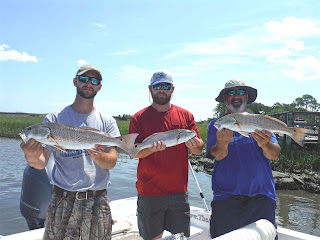 I was back at it today, fishing with my cousin Ryan Garner, his father-in-law Brian, and brother-in-law Blake, meeting them down at the Sawpit Creek boat ramp early this morning. We made a short run up the Nassau River and made a stop alongside a flooding shell bank and began to toss float rigs up current.  It took a few minutes but finely, Blake "knocked the skunk off" when he landed a hard fighting Jack Crevalle.  Brian quickly added a Catfish, then all three anglers got into some small but fun-to-catch Redfish.  The boated and released a good handful.

We ran further up the Nassau, stopped at Seymore's rocks, drifted them thoroughly, had not bites, and moved on.  Our next stop was down at Pumkin Hill and even though each angler was making excellent casts we only got a few nibbles, then Brian, fishing the stern, had his float disappear and , Fish ON!  He played it patiently and soon landed a big 20" Seatrout.

Our next stop was up in Christopher Creek where we switched to jigs and fished some docks....and found one feisty Redfish. We came back out, made a quick run down to Broward Island and fished with jigs and float rigs and I think we picked up one small Seatrout.  "If you're not catching fish, move!" So we did, back to Seymore's Pointe, with the tide just staring out. I'm pretty sure we saw at least two big boils from Redfish feeding but they wouldn't take our bait. The sun was up and it was getting hot but we decided to run thru Horsehead and over to Jackstaff.

After pulling up and putting the bow into the current, Blake had made an excellent cast to a shallow pocket and BOOM! Big Fish On!  He fought it perfectly and after a good battle landed a nice 22" Slot Redfish. Brian went to the same area and BOOM!  Another nice Slot Redfish. Ryan went to the same spot and BOOM! Another nice Slot Redfish! There were definitely a few smaller Reds caught in between and after the "trio".  It made for a great way to wrap up a good day of fishing here at Amelia Island, Florida.