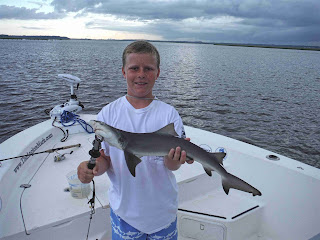 Back to "work" today...fishing with Hughes boys. I met Ted and his sons Webb and Charlie down at the Sawpit Creek boat ramp and after the brief safety orientation, we headed up the intercoastal and dipped into Jackstaff. Ted was convalescing but the two young anglers were tossing float rigs and mud minnows (it's Monday - no live Shrimp!) up to the marsh run outs and making perfect casts and getting excellent drifts and....no real bites!  We fished the mouth of Jackstaff, switching to jigs eventually and even though we had a few nibbles, no takers.

After running thru Horsehead we fished an 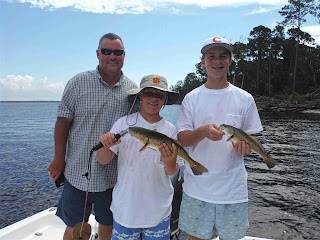 ambush pointe with the float rigs and again, maybe a nibble or two, then Charlie had his bait literally chased down and engulfed - Shark on!  Charlie made short work of this fish and landed it easily for pictures and release. (All fish caught today were released) After easing around the corner and fishing some structure Charlie had made a good cast to the bank and when his float disappeared he took the slack up and set the hook and, Fish On!  He played it patiently to the net and landed a nice feisty Redfish.

We made the quick run down to Broward Island and went back to the jigs. Charlie landed a hungry Seatrout and finally, Webb's rod heated up!  He caught a handful of feisty Redfish and Seatrout and then he and Charlie teamed up on a "double" hookup, both reeling in Redfish.

Although things started out slow, both of these young anglers showed patience and their perseverance paid off with some fun fish catching action here at Amelia Island, Florida.
Posted by Anglers Mark at 7:20 PM