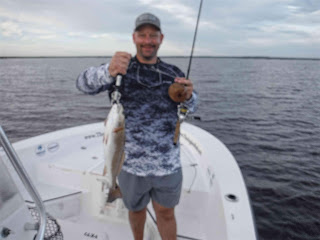 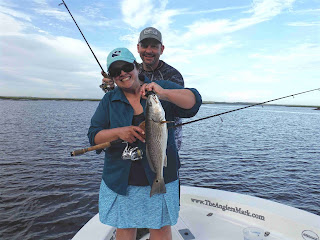 I fished with the Blalock's today, William and Dara, meeting them up at the Dee Dee Bartels Park boat ramp early this morning. We made a quick run over to Tiger but the tide was so low as we crept in we edged up on a sandbar, so we backed off and continued on around to the Jolley River. The tide was changing as we arrived and the bite was very  active. Both Dara and William hooked up with numerous small "feisty" Redfish then finally William had a good bump, set the hook, and Fish On!  He played it patiently and soon landed a nice Slot sized Redfish. We worked up the oyster lined bank and the two
anglers stayed steady catching fish. When Dara felt a strange thump, she gave it a second then set the hook on what turned out to be a keeper sized Flounder. She also added an "almost legal" Trout to her catch, too.

After an hour of fishing and the tide coming in we ran back to Tiger Island and fished the logs. Here it was Dara's turn to hookup and land a Slot Redfish. Both William and Dara put a handful of undersized Black "puppy" Drum in the boat, along with there distant cousins, the Croaker. Before we left we had one more strange bump. Dara worked it to the boat and landed another keeper Trout.

We went back to the Jolley, fished float rigs, and picked up another few fish along the now flooding oysters. Our next stop was around at Bell River, fishing the incoming tide with the floats and live shrimp up by the marsh grass. William picked up a couple of hungry Trout then Dara picked a spot, made a pin point cast, and boom! Seatrout in the box!

Our last stop was around on the outside of Tiger where William fought a large Bonnethead to the boat and Dara battled a hard fighting Jack Crevalle. The sun was up, the breeze was down, so we called it a day, another great one to be fishing here at Amelia Island, Florida
Posted by Anglers Mark at 4:43 PM