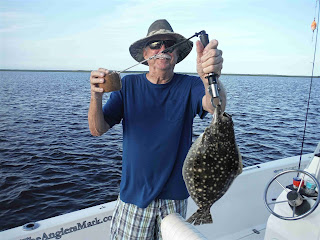 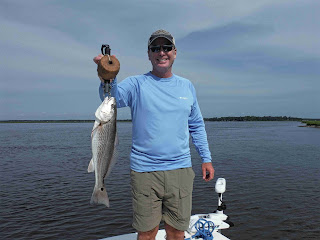 It would probably sound better if it was pronounced with an Arnold Schwarzenegger
accent...:Flounda Mann"....Mike's new name after today's fishing trip! I had met Steve Frost and his brother-in-law Mike down at the Sawpit Creek boat ramp early this morning. There weren't too many clouds in the sky, we had just a slight breeze, it seemed like the temperature was somewhat cooler, and there was definitely less humidity in the air -a perfect day to do some backwater fishing here at Amelia Island, Florida.

However, after we had run up the intercoastal and dipped into Jackstaff and fished for about 45
minutes, we only had a couple of small, but fat Seatrout to show for our efforts. We ran thru Jackstaff and fished a point of grass that seemed to be the perfect ambush pointe, but again, no real bites.

After dropping down the Nassau and fishing some flooded shell beds on the outgoing tide, Mike finally had a subtle bite, hooked up, and landed a nice 16" keeper sized Flounder. Steve got busy catching  some small but fun-to-catch Redish then Mike landed a hard fighting Jack Crevalle. At least we were getting some action. We moved up a ways, switched to jigs, and caught another couple of the small Reds. Steve was pitching forward on the stern and had found that he was getting his bites deeper as the bottom dropped off and after an excellent cast to his edge, BOOM! Big fish on! He fought the fish from the bow and down the starboard to the stern, around the stern, and back to the bow, keeping the pressure on, and after a good battle, landed a nice 21" Slot Redfish.

We fished the rocks at Seymore's and here Mike put another keeper Flounder in the boat, along with a small Redfish. We wrapped up fishing some docks, tossing jigs, and when Mike felt a strange bump, he reeled tight, set the hook, and landed his biggest Flounder of the day, a nice 18" fish. With that, we called it a day, another great one to be fishing here at Amelia Island, Florida.
Posted by Anglers Mark at 4:52 PM