The Blalock's, William and Dara, are heading home, but not after squeezing in one more fishing trip in the backwaters of Amelia Island. I met them early this morning out at Goffinsville and we quickly made the run over to Pumkin Hill to fish an outgoing tide along some shell banks with float rigs an live shrimp. Both Dara and William were making excellent casts, the water was beautiful, the sun was coming up, there was a nice breeze, but the fish didn't cooperate, at all! We had no real bites. 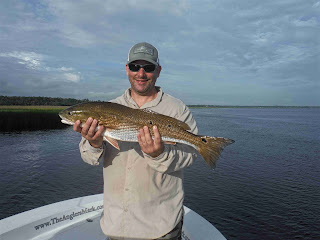 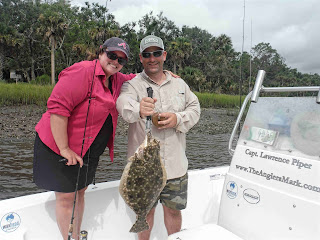 Being in the area, we decided to bounce down to Broward Island. The current was ripping, which I don't much care for at that spot, but William took the bow and pitched a jig and shrimp to a large marsh run out while Dara fished a large stump with the jig. William "knocked the skunk off" when he landed a hungry Seatrout. Dara was just getting a nibbler or two so she switched to a float rig and cast to some calm water next to the bank and that was all it took. She began to catch one Redfish after the other. While she was doing that William picked up a Sheepshead, and maybe another Trout, then as he let his jig bounce along
the bottom with the current, BOOM! Big Fish On!  Except Dara and I didn't think it was of much size, but when William said it was a nice fish, we made room for him. He fought the fish to the stern, kept the pressure on, and soon landed an oversized 28" Redfish!  After photo's, he went lowered him over the side and he was gone with a thrash.

Our next stop was back down the Nassau River, fishing some marsh runouts, and boy how things changed from yesterday. Although Dara landed a feisty Red or two, it was nothing like yesterdays dozens.  We moved up and fished some more shell beds off of Seymore's Pointe, then fished some docks at Seymore's where Dara caught some Croaker -on of which had some size to it - then we dropped back and fished an abandoned dock. Both anglers were working their jigs along the pilings when William had a strong hookup and BAP, fish gone! Ouch! We worked around to the other side, and just as we were about to move on, William was reeling his bait up
when a big fish hit and went deep. This fish was fighting hard and making hard lunges deep. But William was up to the task and after a good battle landed a big 19" Triple Tail! Whoo Whoo, we don't see those too often!

The sun was up and it was getting late in the morning but we decided to fish a few more docks and it paid off. Dara had just made a perfect cast along some free-standing pilings and had no takers but when William followed her in he had a hard THUMP, and a big Flounder came thrashing to the surface - it was BIG! William fought it to the boat and landed a 22" Doormatt Flounder - the biggest caught on the Anglers Mark this year and it places William squarely in the lead in the 2018 Bragging Rights Tournament -Flounder Category (scroll down the right side of this report for standings).

And with that, we called it a day, another great one to be fishing here at Amelia Island, Florida.
Posted by Anglers Mark at 5:33 PM